Such are the kinds of thoughts even long commutes will allow shaped by constraints of place and time.

That was the nature of my train ride this morning.
END_OF_DOCUMENT_TOKEN_TO_BE_REPLACED

My way of life
Is fall’n into the sere, the yellow leaf;

It was a highly dreaded day of bitterly anticipated cold, of polar vortices and chunks of ice on the water. The Hudson had frozen over like I had never seen it before next to New York City probably because they’d been breaking the ice with machines further upstream. END_OF_DOCUMENT_TOKEN_TO_BE_REPLACED 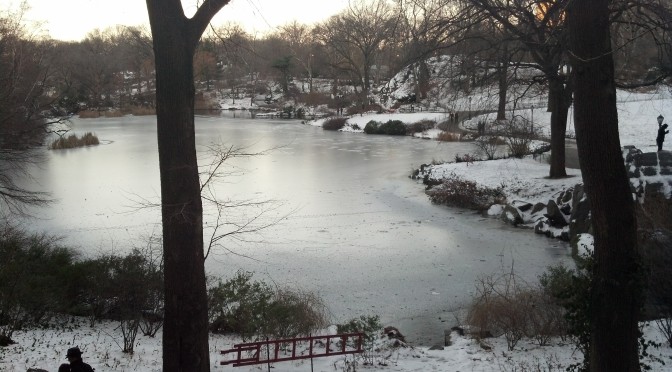 It is about 0° Centigrade/32° Fahrenheit. Since we are at a loose end we decide to take a stroll in Central Park. It’s the kind of harsh, winter day when the brightness of the sun belies the ferocity of the cold. END_OF_DOCUMENT_TOKEN_TO_BE_REPLACED

This morning was the first real snow of the season in Jersey City. At 8 am, it looked formidable outside with little lines of white zipping across the air and a fine, white dust accumulated on the shrubs and railings which melted on the concrete. It wasn’t easy to set out.

An army of darkly hooded people moved towards the train station in unison at rush hour, carefully stepping on the gaps in the little rivulets on the slippery ground and pushing through glass doors to enter buildings along the waterfront. Many had no work at all in these buildings and were walking through just to catch as much of dry warmth as possible for parts of the way avoiding the elements.

In the underground train stations that happen to be partially on the surface and hence open to the cold air, regular commuters showed an amazing knowledge of warm spots as they deftly huddled in corners with the least cold breeze. You could almost see their ears pricking up with the imperceptible distant rumble of the train as it approached. They jumped up from their corners and zipped past just in time as the train entered the station to rush through the few remaining steps to reach the open doors of the trains before they shut on them.

People shook their umbrellas and boots to get rid of the fine, white, dusty solid water. As the train emerged to light out of the darkness of the underground tunnel before reaching certain stations, the windows showed a sudden change in the industrial landscape along the train tracks. Awe-inspiring for those who had the time to look up from their electronic gadgets. END_OF_DOCUMENT_TOKEN_TO_BE_REPLACED