When you come to a new country which is multilingual and English speaking, where the number of languages most people speak is at least two, if not more, you tend to think, at first, that you understand signs and what they mean when they are in English.

Until you realize that you don’t, quite.

After six months in Singapore, it’s still hard for me to know when Singaporeans are serious and when they are tongue-in-cheek, when it’s a genuine mistake in translation and when it’s simply a different usage of English (from what I’ve been used to) and when there is some history behind a term I’m totally unaware of because of which I just didn’t get it.

I’ve passed by this sign for a restaurant at a beautiful mall in Bugis. I thought I’d take a picture of it today. There is a picture of a whole skinned chicken next to it.

There are signs for sales everywhere. This kind of humour is something I’m more familiar with:

The construction taking place all over the island is accompanied by a ubiquitous term that I wouldn’t have used quite the same way but I’m getting more and more used to it– “business as usual.”

Sometimes there are signs where I think there is an issue with translation when it isn’t an issue at all.

The caption is from an older post but I found out later that this is a dish invented by a husband and wife duo and not what it seems like at all.

Other occasions show signs for more practical reasons but they still seem unfamiliar (to me). These cutouts of cows representing various professions of people here on the occasion of fifty years of Singaporean independence are in many places. But also accompanying them is a sign: 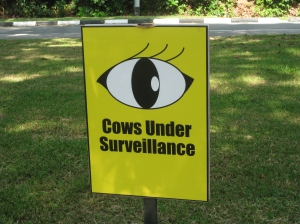 I’m sure that as I spend more time here, either this list will become longer or shorter depending on whether I spot more and more signs or whether I get so integrated that I stop seeing them.

For those of you who are not familiar with this part of the world, I’ll leave you to decipher the following sign:

19 thoughts on “Signs of Singapore”